If you are going to the edge of Russia, you should see everything at once. Far East rare animals, relict forests and nature reserves — nothing is hidden from your eyes while traveling around Primorye.

The tour itinerary follows the expedition routes of famous Russian traveller and researcher Vladimir Arsenyev and Dersu Uzala. You will visit the protected areas of the Primorsky region: Far Eastern Marine and Sikhote-Alin Reserve, Kema-Amga national Park and Goral reserve. You will cover 2500 km by jeep and boat and cross about 130 km on foot, exploring the most wild and beautiful places of  Russian Far East. All trekking routes are light, backpacks are transported by jeep.

Arrival in Vladivostok at 6:30 a.m. Meeting the group at the airport. Transfer through the National Park "Land of Leopard". Tnen you will have trekking along the Krabbe Peninsula — you will see ythe Bay Reid Pallada, Cape Deger and Bay Agate beach and rocks. Snorkeling, relaxing in the secluded bays, swimming in the sea. Spend the night in tents in campsite on the sea coast.

Trekking route on the Gamov peninsula is waiting for you today. You will visit the Salvation and Telyakovsky Bays.

You will see the groves of relict pines, beautiful views, bays with azure water, rocks and islands. Go snorkeling, relaxing, swimming in the sea. Spend the night in a campsite on the sea coast.

Day 3. Lion Cape, Shore of the Singing Pines and kekurs

Today you will have trekking route from Lion Cape to the Baklanyi kekurs with nerpa rookeries, and a symbol of the Far Eastern marine reserve — the Pants kekur.

In the afternoon — snorkeling, swimming in the sea, walking along the coast. Spend the night in tents near the sea in a very beautiful bay.

Day 4. Sikhote-Alin and the Ussuri river

Today you will cover a great distance across Sikhote-Alin. We will see the vast valley of the Suifun River, cross Anuchino, one of the first settlements of Russians in Primorye, go up the Lee-Fujin River, visit the monument of the Dersu-Uzala in Arsenyev, cross the Maximovich moutain pass and see the Ussuri river, that is considered the biggest one in Primorye. By the river Tadasu we descend to the bay. Spend the night in tents on the sand beach of Nerpa Bay.

Trekking route across the headlands and beaches with magnificent views to the Oak Bay with the most beautiful abrasion (created by the sea) land forms in Russia — Rhinoceros Stone Outcrops.

Swimming in the sea. Transfer to the Vladimir's Bay and Cape of Four Rocks. Then go will go to Terney village. Spend the night in Terney in the base.

Day 6. The boat trip and the Goral reserve

In the morning you will go for a boat trip along the Abrek Peninsula. You will admire the beautiful rocks, caves, see colonies of birds, seals in the sea and gorals on the rocks. You can swim with masks and go snorkeling.

After lunch you will continue the sea journey to the Goral Reserve. We repeat the route of the Vladimir Arsenyev's expedition, admire a pristine shoreline, kekures, cliffs and beautiful coves. Seals, amur gorals and numerous sea birds are waiting for you here. At the end of the journey you will return to the ecotourism base in Terney.

Bold Mountain is situated in the preserved area of Sikhote-Alin Nature Reserve. The hiking route to the mountain top (900 m high) begins on the banks of a brook with huge stones and small waterfalls in oak forests, which with increasing height are replaced by broadleaved pine, dark coniferous, and stone birch forests and then elfin pine thickets.

The top of the mountain offers a beautiful view of the Sikhote-Alin forests, the Sea of Japan, lagoon lakes and endless blue mountains. Then you will return to the base, have dinner and rest.

Panoramic view on the Sikhote-Alin mountains and taiga river Maximovka are waiting for you today. You will have a jeep trip and trekking to the Black Shaman — one of the highest waterfalls in Primorye (50 m).

To have a look at it, you have to descend into a narrow canyon with steep stone walls reaching tens of meters in height. The Amgu river meanders through a gorge with stone statues, caves, reddish-purple cliffs and terraces covered with forests. Black Shaman is a deafening sound of falling water, air filled with spray, wet black rocks and a swirling water flow. Spend the night in tents in the forest on the top of the canyon.

Today we will see the Grand Amgu Canyon from above. Trekking in the fairy spruce-fir forest to Arsenyevsky waterfalls in the upper left Amgu. Lunch in the camp.

Returning to the baze in Terney you will go along the Kema river, one of the longest and most abounding rivers flowing into the Sea of Japan. It is known for its cascading rapids: Takunzha, Sekuzha and Pipe, and taiga of broad-leaved, cedar and fir forests.

Today you will have a trekking route to the Huntami Bay with the animal and bird watching. Along the way you will see beautiful stone outcrops, Goraly cliffs with a great view on the coast, the Blueberry river, a beautiful sandy bay and a paleovolcano. You will have lunch in the bay and go swimming. The way back goes along the Blueberry Lake with lots of relict aquatic plants. Spend the night at the ecotourism base.

You will move to Vladivostok via Dalnegorsk, Arseniev, Kavalerovo. Upon arrival you will have a short sightseeing tour of the city. Travel to the lookout "Eagle Nest", offering a view of the Russky Island Bridge and the Zolotoy Bridge, as well as the Golden Horn Bay. Transfer to the hotel, check in and have a rest.

You may stay longer in Vladivostok or go to the airport by aeroexpress.

Included in the price:
Extra charge:

The cost of the tour:
cruise vessel of standard class – from 840 USD 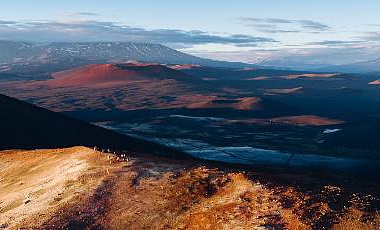 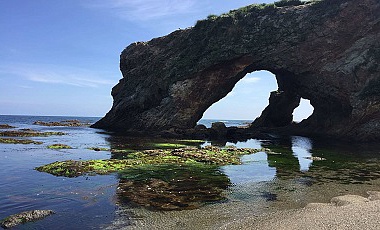 from 1 850 USD
MORE
Treasures of the Pacific Ocean 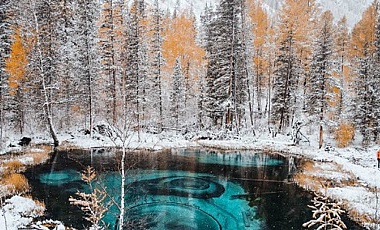 from 1 020 USD
MORE
Winter Altai
ABOUT