Sightseeing tour of St. Petersburg – an open-air museum: architectural ensembles, magnificent palaces and cathedrals, beautiful bridges, regal-majestic plazas, sculptures and “lace cast iron fences” – all this gave the city the right to be included in the UNESCO catalog.

The Peter and Paul Fortress was founded by Peter I in 1703 – the city began with it. On the territory of the fortress towers Peter and Paul Cathedral – the tomb of Russian emperors, where in 1998, The remains of the last Russian Emperor Nicholas II and his family were transported.

St. Isaac’s Cathedral is a unique engineering structure, a 19th-century temple-museum, which has one of the largest domes in the world.

The State Hermitage Museum is one of the world’s largest art and cultural historical museums, known for its masterpieces of world art: canvases of Leonardo da Vinci, Raphael, Titian, Rubens, Van Dyck, Rembrandt, French Impressionists, collections of Scythian gold, sculpture, Oriental art, Culture of the VIII – XIX centuries. If you want to join the Hermitage Friends Club, we’ll tell you how to do it.

Yusupov Palace of the beginning of the XIX century. Attracts with magnificent halls and interiors of chambers. In 1916, Grigory Rasputin was killed in the palace (the favorite of Tsar Nicholas II and his wife).

The Church of the Resurrection of Christ – the Church of the Savior on Blood is built in the Old Russian style. One of the most beautiful temples in Russia. The interior of the temple is decorated with art panels and mosaic icons.

The city of Pavlovsk (25 km from St. Petersburg) was founded in 1777 as a suburban residence of Russian tsars. Pavlovsk is a monument of architectural and park art of the XVIII – XIX centuries. In the style of classicism.

The city of Pushkin (until 1918 Tsarskoe Selo, 20 km from St. Petersburg). The Great Catherine Palace, built in 1708 as a royal residence, is considered one of the masterpieces of Russian baroque. Here is the Amber Room, which is famous all over the world. In the city is the Tsarskoye Selo Lyceum, which was finished by the great Russian poet Alexander Pushkin.

City Petrodvorets (until 1944 Peterhof, 29 km from St. Petersburg) – the residence of the kings, founded by Peter I, “the capital of fountains.” The famous Grand Cascade, which includes 64 fountains, 225 sculptures and sculptural ornaments. In total there are 3 cascades and 144 fountains in parks. In the museum-reserve there are collections of Russian and Western European fine and applied art of the 17th-20th centuries. 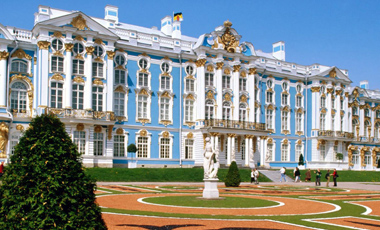 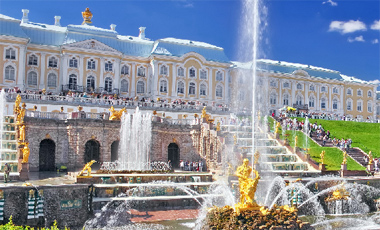 The grand squares, sculptures and other sites that have allowed the city to be included in the UNESCO world heritage list.

Visit to the State Hermitage. The main building and the Arch of the General Staff. Visit to the Yusupov Palace with Rasputin’ room.